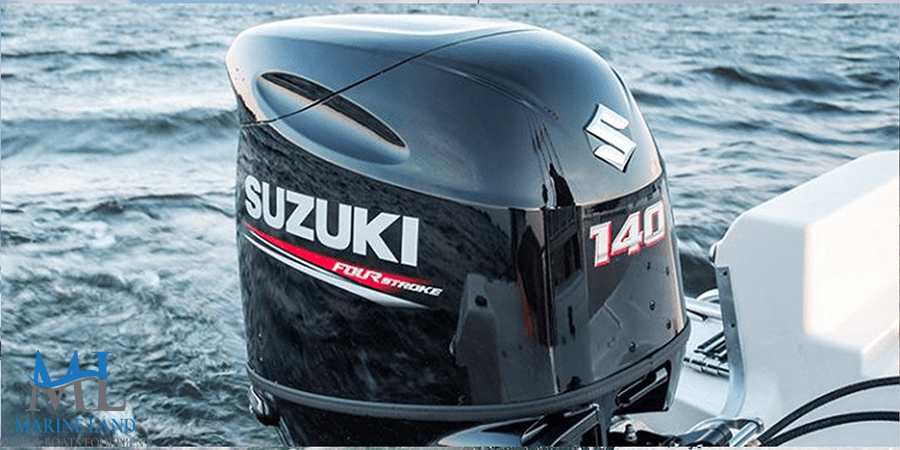 The outboard motor of the boat in the UAE is a single set including the jet engine, gearbox and propeller, which is screwed on the chip or the back of the boat. The motor rotates the propeller and creates the required thrust. In addition to creating driving force, external motors also provide steering control, and by rotating it on a fixed base, the thrust direction can be determined.

The use of external motors is the most common way to move fishing or sports boats in different water depths.

There are different types of external motors. These equipments are produced with different sizes and powers, and the choice of each one depends on what you are going to use the engine for. Among the main examples made, we can refer to 2-stroke or 4-stroke engines.

It is better to know that the number you see on the back of any foreign engine indicates its horsepower.

Propeller angle adjustment is one of the unique features of foreign engines, which is not available in Direct Drive and V Drive engines. Adjusting the angle of the propeller in shallow water conditions is mostly needed by boaters to protect the propeller against rocks or other structures on the bottom of the lake, river or ocean. In such situations, it is recommended to use a depth finder to avoid the dangers.

How to install an outboard motor on boats

Unlike inboard engines, these types of engines are installed on the outside of the boat. Doing this creates more space for people to sit in the motorboat.

The advantages of outboard motors include high horsepower-to-weight ratio, ease of installation and maintenance, and the need for limited maintenance over long periods of time.

Outboard engines are available in 2-stroke and 4-stroke types. In the past, the difference between these two models was more significant. However, thanks to technological advancements over recent years, today's 2- and 4-stroke engines are nearly identical in terms of reliability, weight, speed, and fuel economy.

Main parts of an outboard motor in Dubai

Outboard motors are made up of three main parts. These sections include:

The top half of the engine contains the outboard powerhead, which is made up of several different components. The mid-section refers to the middle part of the engine, and the outboard lower unit is located below.

Let's take a closer look at each of these parts and how they work.

The top section of an outboard motor is made up of various parts that can provide the power needed to move the boat. These components include the engine block, cylinder heads, pistons and valves.

Essentially, the powerhead is made up of the bare bones of the engine, which include the following components:

Engine block: The engine block is where the moving parts of the engine are located, which includes piston rods, pistons, and crankshafts. It also contains the cylinders in which the pistons are located. Engine strokes occur inside the engine block and are different depending on whether the engine is 2 or 4 stroke.

Cylinder head: Another part that is in the head of the external engine in Dubai is the cylinder head, which is located on top of the cylinders. Depending on whether it is a 2-stroke or 4-stroke engine, this is where the camshaft, spark plugs, cams and valves are located. The components we introduced make up the main part of the powerhead.

Another important component in the outer engine head is the cooling passages. Basically, cooling passages are channels that cool the engine with seawater so that the metals that make up the engine don't overheat during operation.

In order to regulate the temperature of the water flowing in the engine, a thermostat is located in the cooling paths. The job of the thermostat is to make sure the engine is not too hot or cold. Because both cold and excessive heat can interfere with engine performance.

2. The middle part of the outboard engine in Dubai

In the middle part, there is the drive shaft housing, which acts as the main structural part of the engine. This housing contains a water pipe that connects to the lower unit and carries the cooling water to the powerhead. This area also has a drive shaft that sends rotation and torque to the lower unit where the propeller is located. Generally, the middle part of the channel is between the powerhead action and the lower unit and also connects the outboard motor to the boat.

The lower unit of the outboard motor, like the powerhead and the middle part, consists of many moving parts.

The lower unit is placed underwater and consists of various components, including:

The lower unit consists of gears that, by applying force to the teeth of another gear, transmit the rotational force to the external motor. In the lower unit of the outboard motor, the output torque of the motor is rotated 90 degrees to drive the propeller shaft.

A pinion gear, a reverse gear and a forward gear are located in the lower unit of the boat's outboard motor: These gears are responsible for transmitting forces that produce different speeds, torques and directions from the power source.

When we talk about outboard motors, the terms skeg and tiller are familiar terms to us. Scourge is the lowest point on an outboard motor in Dubai. Scotch acts as a precision rudder that allows your boat to turn safely and efficiently. It also protects the propeller from getting caught in debris in the water or other hazards that the boat comes into contact with.

The tiller also plays an important role in steering the boat. A tiller is a lever that is attached to the rudder column and can be used by the driver to steer the boat.